STANDING COMMITTEE ON STRUCTURAL SAFETY
BACKGROUND
There have been recent collapses of temporary stage structures in the USA and in Europe during entertainment events. These have resulted in fatalities and numerous injuries. Reasons why the failures have taken place have not yet been published, although initially wind has been reported as a contributory cause. The temporary structures which have been involved in these collapses appear to be similar to those which may be used in the UK. 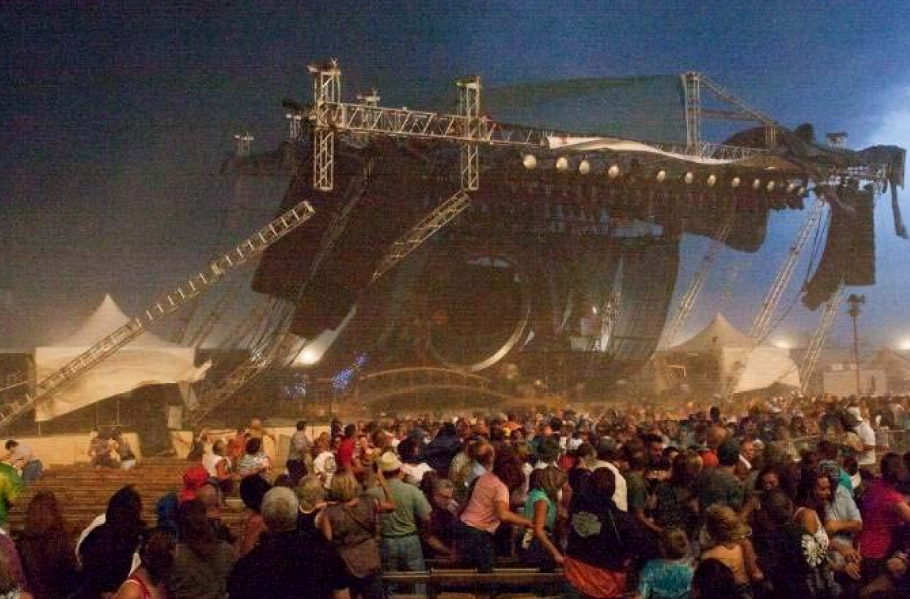 WHO SHOULD READ THIS ALERT?
This Alert is aimed at those who
may commission or procure or
licence temporary stages and other
temporary structures, for example
large outdoor TV screens, which
offer potential risks to the public.
These may include owners of sites
and venues, promoters, contractors
and their designers, local authority
licensing officers and building
control officers, and insurers.
SCOSS has previously issued Alerts
on failures of temporary structures
[1], [2].

simple bridges between two telescopic towers designed to
carry vertical loads only. The bases to these towers were
ground bearing with no fixity. In the 1980s there was a
significant development, which enabled trussed frames to
‘self-climb’ a number of vertical masts. By linking a
minimum of four such mechanisms it then became
possible to suspend sound and lighting equipment in
venues that had no ability to hang this equipment at high
level. Trusses and their associated components to make
ground support structures (such as that shown in Figure 2)
were then developed. The structural arrangements were
designed to carry vertical loads but, unless specifically
intended for outdoor use, may not have been designed for
lateral loads. In the 1990s a number of purpose built arena
venues opened where there was a need to suspend sound
and lighting equipment at height. Many sound systems and
video screens are now made purely for suspended use (ie
they cannot be stacked on a surface). This may mean thatground support systems carry heavier loads than allowed for originally and emphasises the need for proper design by
a chartered structural engineer. With the increased popularity of outdoor rock concerts and other events requiring the use of heavy overhead equipment, many more ground support systems are used in the open. These temporary structures are exposed to vertical imposed loadings from attached lighting and sound equipment and also to lateral loadings resulting from wind. They may have modestly sized bases, slender towers, and heavily loaded horizontal trusses at roof level. Furthermore they may be fully or partially sheeted with, for example roofing material or advertising banners, which can
significantly increase the lateral loadings. The stability of these structures may be dependent upon the efficiency of guying arrangements using ground anchors, kentledge blocks or ballast to resist uplift. The risk is that when subject to the combined vertical equipment loads, horizontal wind loads and eccentric vertical loads the resulting forces can cause catastrophic failures which may result in collapse if the structure is not competently designed, constructed, and managed in use.

GOOD PRACTICE FOR TEMPORARY DEMOUNTABLE STRUCTURES
“Temporary stages should be assembled in accordance with engineering documentation that comprises drawings, calculations and specifications all prepared by a competent person. Engineering documentation should be independently checked by a chartered engineer.” This is an extract from Temporary demountable structures, Guidance on procurement, design and use, third edition, published by the Institution of Structural Engineers [3] (TDS3). It goes on to say: “Design of any temporary staging system is essentially a consideration of balance between weight, strength, fabrication cost and deployment cost of the individual components. In such circumstances safety must not be compromised.” “Roofs should be designed to support the imposed loads as well as the self-weight of the structure. Imposed loads may include working personnel, loads created by wind and snow, suspended sound, lighting and video equipment and anchorages for moving equipment.”

CURRENT STATUS ON STATUTORY CONTROL
The situation is complex and has sometimes been found to be less than satisfactory from a public safety point of view. It is the clients, who may include venue owners and event organisers, who are usually principally responsible in law for complying with public safety legislation while the structure is in use. Penalties for non-compliance can be severe. A temporary structure is usually erected as part of an event that requires a licence or safety certificate from a local authority. In response to recent failures local authorities are advised to ensure that their Safety Advisory Group considers the structural safety of temporary structures and are advised to ensure that the Group considers the following.
Prior to Build

However there is a lack of consistency amongst local authorities and some will not comment on temporary structures as they believe that the assessment of risk is the responsibility of the event organiser. The Health and Safety Executive (HSE) has become more involved in recent years. The erection and dismantling of these structures is considered to be construction work and as such the enforcing authority for the regulation of health and safety during building and deconstruction of these structures falls to the HSE. Enforcement of the Health and Safety at Work Etc. Act 1974 during the event falls to the relevant Local Authority except when they are running the event where it reverts to HSE. HSE has published its own guidance such as The Event Safety Guide: a guide to health, safety and welfare at music and similar events HSG 195 [4]. Issues which have arisen from the findings of investigations into collapses in the UK include concerns that structures are becoming more sophisticated without having adequate design controls in place and that there are demanding time constraints on designers, contractors, and local authorities.

PROCUREMENT AND USE OF TEMPORARY STRUCTURES
Whilst this Alert is primarily concerned with structures for temporary stage structures the principles apply equally to all temporary demountable structures. A prime responsibility of the client is to make sure that competent persons are employed to design, independently check, erect, inspect, monitor on site and dismantle the structure.

It may be difficult for a client to ensure that truly competent persons are engaged. Companies will be expected to reach the standards set out in the core criteria in CDM 2007 ACoP Appendix 4 [5]. Past performance may be a useful guide as may the experience of the contractor and the quality of their documentation and knowledge about design issues. Engineering documentation should include a clear summary of the design parameters and the operating limits of the structure.

Contractors should be able to demonstrate to the complete satisfaction of the client, or the client’s engineers, that the proposed structure has been specifically designed to accommodate all vertical loads, including self weight, lights, and sound equipment and snow (if applicable). It should also be capable of withstanding agreed wind loads applied to the structure and equipment and any roofing and side cladding (advertising banners), and, if relevant, vehicle impacts. The design should be for the structure as a whole taking account of overall robustness, strength and stability as well as the capability of the individual components. Elements such as trusses which are connected together should be able to withstand local member loads. To carry lateral loads there must be appropriate connections between vertical and horizontal elements and all loads must be taken safely to the ground through suitable foundations. Frames must be braced in each axis to avoid undue distortion and lack of stability. 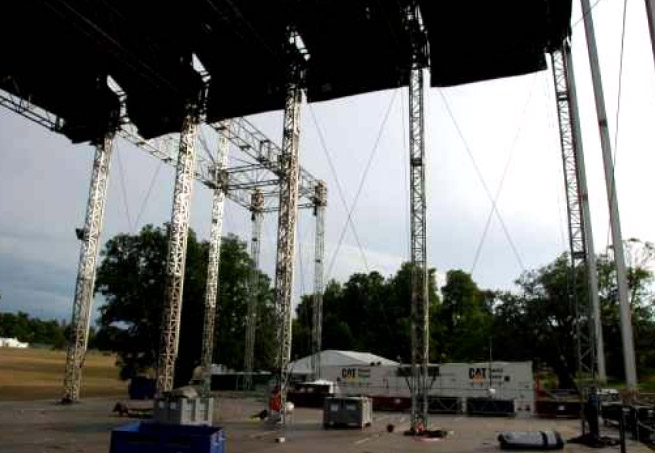 Regardless of the competence of any engineers involved in the design process, systems sold to end users frequently rely on that end user making site specific judgements about the anchorage of temporary structures to the ground. Positions of ground anchors or kentledge shown on drawings may be changed for operational reasons. This should only be done in consultation with the designers or another competent structural engineer otherwise structures that are satisfactory on plan may well not be safe. Anchorage problems led to the failure of the Saddlespan structure that was the subject of the SCOSS Alert in 2010 [1]. End users may not appreciate that by taking decisions on anchorages they are attracting design responsibilities. Almost all temporary stage structures are designed for an upper limit wind speed and guidance is given in Section 8 of TDS3 on how to consider wind loads including advice on operational site management. Documentation should state which of the two wind codes

BS 6399 or Eurocode 1 is being used. Structures in place for 28 days or more should be designed as if they were permanent structures with regard to wind loading. For temporary structures there should be a wind management plan. Wind speed monitoring equipment must be provided on site when wind is critical to the safety of the structure and continuously monitored during operational periods. Should the designed operational wind speeds appear likely to be exceeded then appropriate steps should be taken in accordance with the wind management plan, as recommended in TDS 3, and these could include evacuation of the area. It is essential that the operational management is undertaken by a competent person with the authority to implement the operation’s wind management plan. Wind speeds at which the recent overseas collapses have occurred have not yet been published, but there have been cases in the UK of wind induced failures of temporary structures where recorded wind speeds have been within foreseeable limits. The number of persons and organisations engaged in a large event may be considerable and every effort should be made to have clear lines of communication and clear demarcations of responsibility to safeguard operators, officials, performers and the public.

Key points to look for are:

1. Temporary event structures: ‘saddle span’ type roofs: SCOSS Alert 2010
2. Risk issues associated with large TV/video screens at public events: SCOSS Topic paper 2008
3. Temporary demountable structures, Guidance on procurement, design and use, Third edition, published by the Institution of Structural Engineers, 2007
4. The Event Safety Guide: a guide to health, safety and welfare at music and similar events HSG 195; published by HSE, 1999
5. CDM Approved Code of Practice Appendix 4, HSE 2007
Whilst SCOSS has taken every care in compiling this Alert, it does not constitute commercial or professional advice. Readers should seek appropriate professional advice before acting (or not acting) in reliance on any information contained in or accessed through this Alert. So far as permissible by law, SCOSS does not accept any liability to any person relating to the use of any such information.